Three days of sessions, discussions and meetings, one day for community, businesses, publishers and practices, and another day of code sprints - Drupalcon Vienna was a blast! It was very special experience for all our team members to have Drupalcon in town and we are proud to be among the supports of the event. 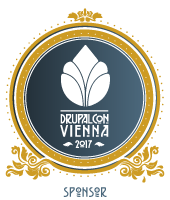 Here is a summary of our take-aways of the con:

One of the most discussed topics on DrupalCon Vienna was the idea of a headless CMS combined with a completely decoupled frontend. This way Drupal could not only serve as backend for a single website but as centralized data deliverer for applications of all kinds of devices. Combined with powerful JavaScript frameworks, like Angular or React, Drupal sites keep pace in the insanely fast changing world of web applications. Therefore Drupal should no longer be seen as an "all-inclusive"-CMS solution but as a single part in a modern Web-infrastructure and can return to its core strengths: Managing content.

As an example of how such a modern infrastructure could look like, kurier.at gave an insight of their system. Andrew Macpherson, Théodore Biadala and Kristen Pol are part of the core accessibility team and it's always interesting to see what Drupal has achieved in all those years adressing persons with disabilities. The team briefly talked about some components of accessibility and the recent core accessibility improvements and what challenges they are facing. They gave half of their time room for discussions, which was very enlighning and informative. For instance automated testing can only cover around 40% of all accessibility issues. To get reliable test results many testss need to be done by real persons.

Another highly interesting, mind opening talk by Everett Zufelt was about how even little changes to the code can have a huge impact on a site's accessibility. Bringing in just a little more structure and semantic by using a wide variety of the available HTML5 tags, instead of just using <div> and <span>, is a big step forward for people depending on screen readers. The presentation also featured a list of good and bad examples which obstacles can be found and how most of them can be easiliy eliminated. Session: JavaScript and Accessibility: Don't Blame the Language
Session: Core Accessibility: How are we doing, and what can we do better?
NYPL Design Toolkit
Manuel Matuzovic: Writing CSS with Accessibility in Mind

The eleven Administration Theme should be a modern way of how an administration should look like and behave with CSS variables, CSS grid and other CSS techniques supported in most modern browsers. As this is not intended for a wider audience and addresses solely administrators and editors backward compatibility with older browsers is not implemented.

There is also an own subchannel in the Drupal slack channel for the eleven theme. With UI Patterns it should be easy to get rid of the templates folder in the theme and connect the display of a field to a template in the administration backend directly. Advantages are a better overview and less Twig files.

The Thunder team organized a BoF about "Landing Pages and Layouts" which lead to an interesting discussion on how layouts can be implemented in Drupal, as well as the tools & modules needed for editors to be able to have the necessary "content blocks" available for building good landing pages.
During the keynote, Dries has shown a demo of the new Layout Builder, which is currently worked on for inclusion in Drupal 8.5. As Tim Plunkett noted there will be an upgrade path of panelizer to the new layout builder in core, so panelizer can be considered a future-proof solution for layouts right now. Amazee.io demo-ed lagoon, their fully open-source docker production system. It's powered by docker compose, kubernetes and openshift and nice CLI and UI tools are planned for it. This and the branch-ed based auto-creation of new environments make it an interesting development that could be the base for the next version of our in-house docker CI system, which is able to create test-sites per feature-branch including initialized content. Amazing stuff! ;) Twitter
Facebook
LinkedIn
drupal.org
On drupal.org:
knud-frank
Develops and conducts Internet projects since 1995. Development of own CMS solutions, with TYPO3 (since 2008) or Drupal (since 2012). Project management since the first project in small and medium sized teams.